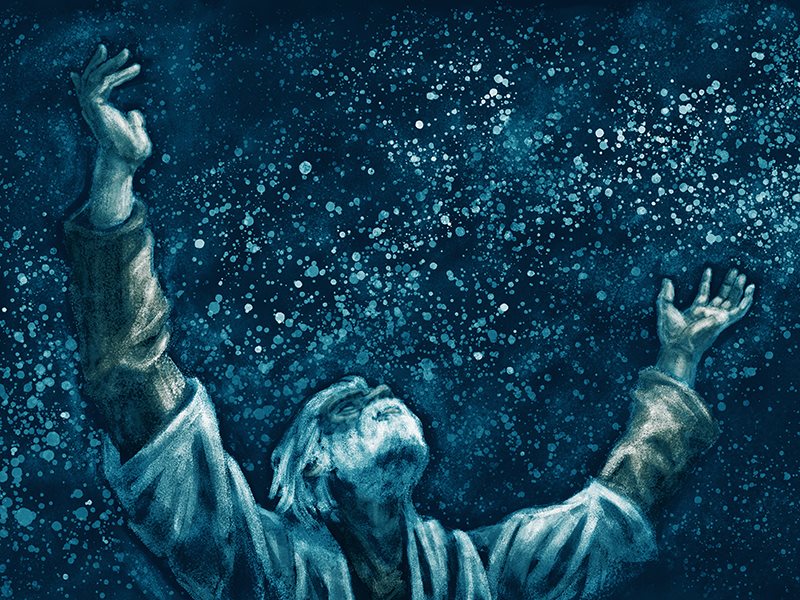 [1] Now the LORD said to Abram, “Go from your country and your kindred and your father's house to the land that I will show you. [2] And I will make of you a great nation, and I will bless you and make your name great so that you will be a blessing. [3] I will bless those who bless you, and him who dishonors you I will curse, and in you all the families of the earth shall be blessed.”

How is the Abrahamic Covenant connected to the first advent of Christ? Is there a connection? In what way was God’s covenant with Abraham a part of God’s grand redemptive plan to redeem for Himself a people for His name? In what way was Abraham going to be a blessing to the “families of the earth?” Does Jesus’ birth (first advent) have any relation to God’s promise to Abraham? Do you think of Abraham when you think of Christmas? Let’s consider this for a few moments together.

In your mind’s eye, I’d like you to write four words: Abraham, Jesus, Salvation & Families. Place those words in the forefront of your mind, circle them, underline them or relate them. However, you choose, keep these words, these concepts, clearly in your mind as we consider some important Scripture together. I want to connect these words for you through the prism of the Abrahamic covenant.

The reason for this is that we tend not to connect God’s promise to Abraham with the birth of Christ, the first advent. Nor do we see in that connection the global scope of the gospel and where that “blessing” starts.

First, we must recognize that it was with Abraham that God made the covenant of promise.

The Apostle Paul referred to this as the covenant of promise in Galatians 3:15-18. Why would the Abrahamic Covenant be called a promise? Most likely for two reasons: God had promised a deliverer in Genesis 3:15 and because God had made a promise to give Abraham a son which had clear messianic implications (Genesis 15:6). How much of this Abraham understood is hard to know exactly but it is fair to deduce that he was aware of the messianic implications to some degree, though space here does not allow for a case to be built.

Paul goes on in Galatians 3 to make the case that salvation is by grace through faith and not by the self-righteous works of the law exactly because it was so for Abraham, …just as Abraham believed God, and it was counted to him as righteousness (Galatians 3:1-6). Therefore salvation is by faith in the promise of God and not by the doing of the law. This is very significant in that this declaration of God about Abraham occurred 430 years before the law was given to Moses (Galatians 3:17). This case is built with great precision both in Romans 4 and Galatians 3. So we see that God’s covenant with Abraham is of vital importance to the gospel message.

Secondly, we see this connection was recognized by Matthew, Zechariah, and Mary.

Have you ever noticed how Matthew opens his genealogical record of Jesus? The book of the genealogy of Jesus Christ, the son of David, the son of Abraham (Matthew 1:1). To the average twenty-first century western reader this verse is practically invisible but to a first century, Jew for Matthew to open his gospel account with this sentence was to open with a bombshell! Matthew here, in no uncertain terms, assigns Jesus the most emphatic and unique position in Jewish history and prophecy – to be the promised Messiah! Do not miss this. To say that Jesus was the son of David was to give him the reserved, solemn, holy and revered title of the Messiah, the promised Savior, and Deliverer of Israel. “Son of David” was one of the primary designations for the Messiah. Most of us get this and are not completely surprised by it. We’ve heard the Christmas story enough and we understand the prominence of King David enough that understanding this is not a giant leap for us. What I want us to consider is the next genealogical connection, son of Abraham. This is also a designation for the promised Messiah but this one we tend to miss. Matthew did not.

Neither did Zechariah, John the Baptist’ father.

[67] And his father Zechariah was filled with the Holy Spirit and prophesied, saying, [68] “Blessed be the Lord God of Israel, for he has visited and redeemed his people [69] and has raised up a horn of salvation for us in the house of his servant David, [70] as he spoke by the mouth of his holy prophets from of old, [71] that we should be saved from our enemies and from the hand of all who hate us;[72] to show the mercy promised to our fathers and to remember his holy covenant, [73] the oath that he swore to our father Abraham,… (Luke 1:67-73 ESV)

Notice that the first advent of Christ was clearly seen by Zechariah as the fulfillment of the covenants God made with David and Abraham. Mary, the mother of Jesus, also made this profound connection in her praise of God, (the Magnificat).

[46] And Mary said, “My soul magnifies the Lord, [47] and my spirit rejoices in God my Savior, [48] for he has looked on the humble estate of his servant. For behold, from now on all generations will call me blessed; [49] for he who is mighty has done great things for me, and holy is his name. [50] And his mercy is for those who fear him from generation to generation. [51] He has shown strength with his arm; he has scattered the proud in the thoughts of their hearts; [52] he has brought down the mighty from their thrones and exalted those of humble estate; [53] he has filled the hungry with good things, and the rich he has sent away empty.[54] He has helped his servant Israel, in remembrance of his mercy, [55] as he spoke to our fathers, to Abraham and to his offspring forever.” (Luke 1:46-55 ESV)

Thirdly, it was through Abraham that all of the families of the earth would be blessed.

Through Abraham, the “seed” (offspring) would come (Galatians 3:16-19), the root of Jesse (Isaiah 11:10), who is the lion of the tribe of Judah (Revelation 5:5). He would save His people from their sins, people from every tribe, tongue, and kindred.

How would this “blessing” be accomplished, typically speaking? According to the covenant, it would be through you all the families of the earth shall be blessed. Some might say, “Oh, well ‘families’ here refers to ‘people groups.’ And I would agree. But think with me for a moment and let’s push this back a little farther in its etymology.

Why does God call people groups “families?” Is it simply because the Bible is small in its scope? No, because these are “families of the earth.” This promise to Abraham has global ramifications and the Scriptures in Genesis 12:1-3 are careful to bare that out. Or is it because the Bible sees people groups tribally, through their most basic element, the family unit? I believe this is the case.

“In Genesis 12:3 and 28:14, the Hebrew phrase for ‘all the families’ (kol mishpehot) is rendered in the Greek Old Testament by pasai hai phylai. The word phylai means ‘tribes’ in most contexts. But mishpahah can be and usually is smaller than a tribe. For example, when Achan sinned, Israel is examined in decreasing order of size: first by tribe, then by mishpahah (‘family’), then by household (Josh. 7:14). So the blessing of Abraham is intended by God to reach to fairly small groupings of people. We need not define these groups with precision in order to feel the impact of this promise…” John Piper, Let the Nations Be Glad, p. 168

It refers to “people groups.” It also is referring to families but the modern mistake is to fail to understand that in a tribal sense. In those times it would be natural to refer to a “people” as the sons of this man or that, in a patriarchal way. That’s why Israel is referred to as the sons of Jacob or the people of Abraham. So it is, in my opinion, quite right to think of God blessing, reaching, the people groups of the earth through there most basic element, the family unit, as it connects with the other family units in their people group.

What does this say then about the blessing of Abraham to the families of the earth? It says that the Son of God will save people from every family group on the earth. It also says that the starting place, the launching point, or if some like it better to say, the emphasis of evangelism ought to start with and seek to reach whole families, which lead to multiple families, which lead to communities, which lead to regions, which lead to nations and/or ethnic groups. No wonder Scripture says that when the Messiah would come he would turn the hearts of the fathers to their children and the hearts of children back to their fathers (Malachi 4:6 and Luke 1:17). It says we do as the jailer of Philippi did when he was saved by believing in Jesus. He was saved; he shared this message first with his family and then they were all baptized. Do we start by seeking to reach a whole nation or a whole ethnic group or should we start by reaching them one family at a time? Of course, neither is wrong but it is clear that God desires to bring the blessing of the covenant of Abraham to every family and household.

The term "families" as it is used in Genesis 12:1-3 is used in the sense of people groups, we might say ethnic groups "of the earth." This refers to the global scope of the gospel, i.e. "...to all nations" (Mt 28:19-20). It is right to refer to these as "people groups" in Gen. 12:1-3 but it is also right to understand this in the sense of "families." It is quite natural then to refer to a people as the sons of this man or that man, in a patriarchal way. The modern mistake is to fail to recognize that this is written from a tribal and/or clannish vantage. It is patriarchal in nature. For instance, this is why the Israelites are often called "the sons of Jacob." Other such examples can be found in the OT. Hence, we must see the people groups as the OT does, as single families combining to make tribes and communities, combining making people groups and even nations. Mary follows this interpretation by applying the blessing of the coming of Jesus to be the fulfillment of the Abrahamic Covenant, that God was sending the savior as he promised thus making salvation according to promise and not according to the law. Thus we become me the children of Abraham since he was saved by faith just as we are. The application of the discussion to evangelism and missions is that the essential element in every people group is the family unit and therefore should be our launch point for sharing the gospel just as it was for the Philippian jailer (Acts 16 & 17).