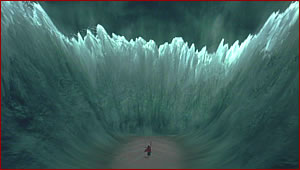 Is God your deliverer? Has he delivered you? Do you think of God in these terms? Or is this an unfamiliar way for you to view God? I would like to challenge you to consider with me for a few moments how our God lovingly delivers his people. Our journey starts approximately ten thousand years ago in Eden. Like a master craftsman God has created two individuals, first Adam, then Eve, father and mother of the human race (Genesis 1-2). Although God had created everything well and pronounced it good it wasn’t long before Adam and Eve, yielding to Satan’s temptation, fell into the bondage of sin (breaking God’s commands). Certainly the low point in the creation account, it is here at this dark moment when judgment looms overhead that we are able to witness God as Deliverer for the first time in human history (Genesis 3:1-21).

Israel’s exodus from Egypt is another example of God delivering his people (Exodus 6:1-8). The people of Israel had been in Egypt for 400 years. At the end of their sojourn in Egypt, they had become enslaved by the ruling Pharaoh. God saved his people with demonstrations of his awesome power ending with parting the Red Sea and drowning the Egyptians that pursued them (Exodus 14:1-31). Consider Moses’ summary of what God did that day: “Thus the LORD saved [delivered] Israel that day…Israel saw the great power that the LORD used…so the people feared the LORD and they believed the LORD…” (Exodus 14:30, 31).

Most of us have heard about what God did in the first Exodus but did you know there was a second Exodus? God continued to deliver his people even after their nation was destroyed and the majority of the population was taken captive to Assyria and Babylon. God judged Israel for their constant idolatry and desire to sin against him. He judged them by allowing Israel (the northern kingdom) and Judah (southern kingdom) to be conquered by two evil nations. Jerusalem was destroyed, the temple demolished and the people were deported. It seemed that things could not get worse. Maybe God had forsaken his covenant people. Nothing could be farther from the truth. God sent his prophets (Isaiah, Jeremiah, & Ezekiel) who after having announced judgment promised deliverance. As God’s people watched the ruins smolder they could cling to the promises of God that he would bring them back again someday (Jeremiah 31:1-8; 32:36f.; Ezekiel 20:33-38) In fact, Isaiah even compares the return of God’s people to the Exodus from Egypt (see Isaiah 11:15, 16). This is why some scholars have called the Jew’s return from Babylonian exile a “Second Exodus.” God delivered his covenant people – again.

Why would Isaiah compare their return from exile to the Exodus (see Isaiah 11:15, 16)?

Israel’s exodus from Egypt serves as the basis for another comparison. This time the comparison is in the New Testament. Isaiah promised another deliverance from the Lord, a deliverance that was beyond the return of the exiles, even beyond any physical deliverance, a spiritual deliverance (Isaiah 11:1-3). God delivered Adam and Eve; he sent Moses to deliver Israel from Egypt, and Ezra and Nehemiah to deliver the exiles. God had promised that he would send a “deliverer” who was like Moses and Ezra but greater. Isaiah promised that this deliverer would be from the lineage of King David (Isaiah 11:1; Revelation 22:16). In Luke’s gospel, we discover that Jesus is that promised Savior (Luke 2:54, 55, 68f.). God would once again deliver his people but this time their exodus would be spiritual and it would cost him his own Son (Luke 24:25; John 3:16). Jesus laid down his life for you (John 10:11) to save you from your sins and grant you eternal life (John 11:25). God is the Savior of his people. He delivers his people and desires for them to worship him as their Deliverer. If God has displayed such awesome power to be our Savior shouldn’t we respond to him in some loving way?

Love You All In Christ,